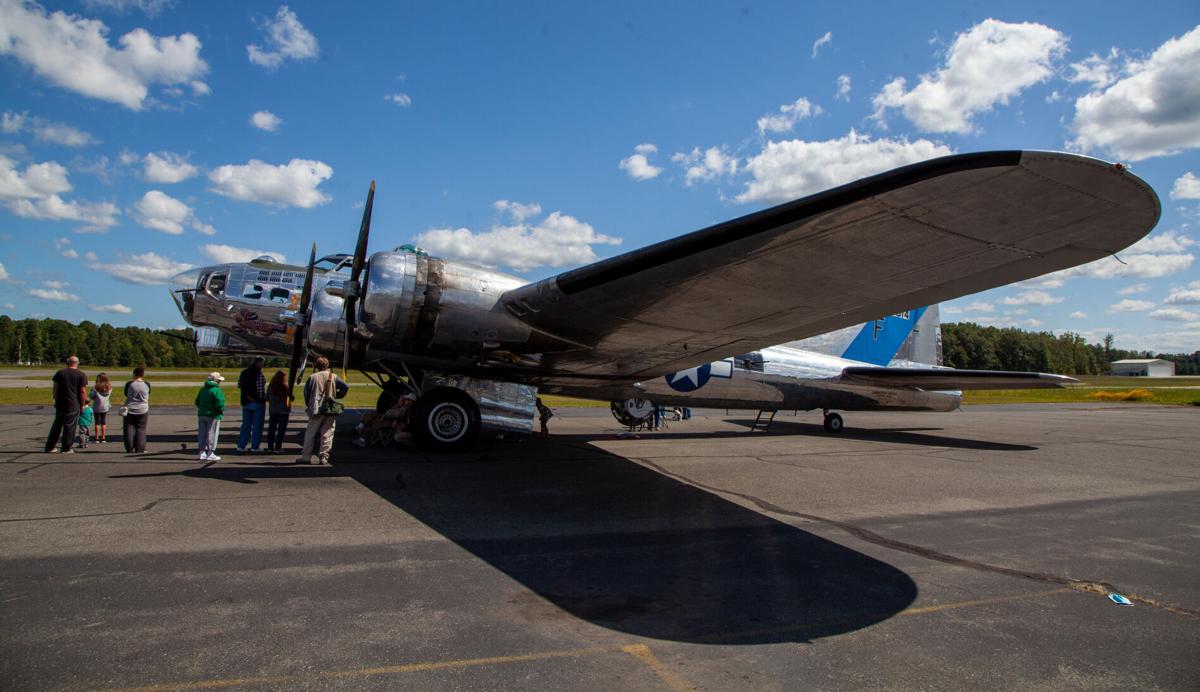 ASHLAND, Va. -- The World War II-era B-17 bomber "Sentimental Journey" draws visitors to the tarmac during a visit to the Hanover County Airport on Sunday, Sept. 20, 2020. 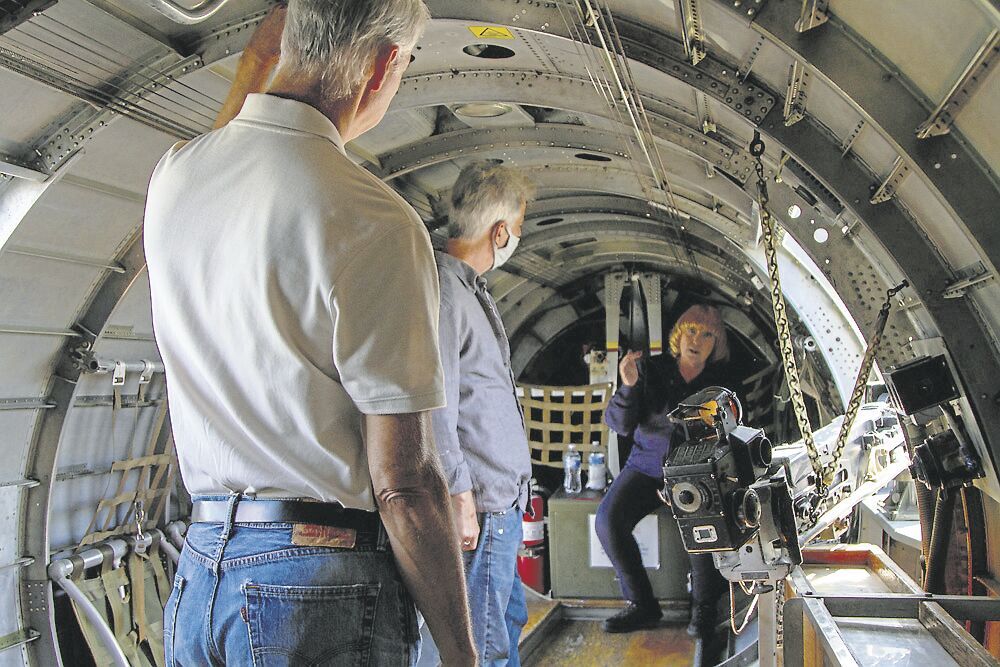 The waist gunner’s compartment may look spacious enough for two, but the space could get quite claustrophobic in the heat of battle.

As part of an effort to remind current and future generations of that sacrifice, a World War II-era B-17 Flying Fortress, the Sentimental Journey, paid a visit to Hanover County Airport three weeks ago.

The bomber, a B-17G designed by Boeing but built by Douglas, is part of the Commemorative Air Force’s “Flying Legends of Victory Tour.” During its stop in Hanover, visitors could tour the bomber on the ground. Some were able to get a flight on it before mechanical issues grounded it on Sept. 19 and 20.

There was no shortage of “Wow!” factor, whether one experienced the bomber in the air or on the ground. It is a flying museum – one with an important mission.

“We’re here to educate, to inspire, and to honor,” said Ed Campbell, ground operations coordinator for the Commemorative Air Force Airbase Arizona B-17. “It’s a very short mission statement – we’ve revamped it over the years – but our job is to educate people about the roles of these airframes and what these air crews did. …

“The folks in World War II performed a mission without being asked for the most part. They didn’t go screaming and dragging. They volunteered after Japanese forces attacked Pearl Harbor to go and fight for freedom.”

Those who volunteered for flight duty in units such as the Eighth Air Force in England, fought for freedom thousands of feet above ground, in below zero temperatures and in an

atmosphere where unconsciousness would result after a few seconds without supplemental oxygen. Their only protection from the elements – and enemy fire – was a flying aluminum can loaded with fuel and high explosives.

American authorities trusted in daylight precision bombing in the belief that such an approach would allow maximum destruction of targets with minimum risk to air crews. Unfortunately, such an approach demanded straight-and-level flight toward the target of the day – leaving the bombers, easily seen in the daylight, vulnerable to enemy fighters and antiaircraft fire.

To get a feel for what it was like serving in the U.S. Army Air Forces in World War II, check out the Clark Gable documentary, "Combat America."

Seventy-five years later, it is almost impossible to appreciate what those flight crews experienced.

“You think about what they had to do,” Campbell said. “Firing guns and so forth -- being fired at -- it’s cold. The flight suits they were wearing were capable of being plugged into electricity to keep them warm – but they would often catch fire. The windows would frost up so that you couldn’t see the enemy coming your way – and you still had guys volunteering to go on these planes …

“The things that they were tasked with doing are virtually unimaginable. You can get a pretty good idea – Hollywood does a decent job but not a grand job. You’re going to be able to see the actors, but not how confining it is in the airplane.”

Taking a tour of the B-17 helps drive home the notion of how cramped the space was – without the added stress of getting shot at. There is no shortage of spaces where one’s head can make unauthorized contact with metal objects. It takes a bit of a scramble just to get a glimpse into the nose compartment where the bombardier and navigator were based. The cockpit can, at best, be considered cozy, but when one adds a flight engineer monitoring the condition of the aircraft – or firing the top turret in combat – any notion of coziness is quickly dispelled. A narrow catwalk through the bomb bay links the fore and aft compartments of the plane.

Aft of the bomb bay is the radio compartment, but its sole occupant, the radioman/gunner, shares a space with radio communications and navigation equipment as well as one M2 Browning .50-caliber machine gun to protect the bomber from attacks from above.

The only relatively spacious compartment follows – the side gunners’ compartment, but it contains the drive mechanisms for the ball turret in the belly of the aircraft and, when full of two waist gunners and flying casings from the .50-caliber shells, gets cramped fairly fast.

As for the ball turret, the gunner had to crawl into the turret through a narrow hatch, curl into a fetal position with barely enough room to activate the twin .50-caliber guns’ controls, much less breathe. To make matters worse, despite the diminutive size of the ball turret gunners, there wasn’t enough room in the turret for both them and their parachutes.

One ball turret gunner, Alan Magee, was thrown free of his destroyed B-17 without a parachute. He fell four miles, crashing through the glass roof of the train station in St. Nazaire, France. He survived the fall and the war, but most airmen in a similar situation weren’t so lucky.

While Americans tend to remember only the U.S. Army Air Forces' contributions to World War II, many of our allies had been at war for several …

Finally, there is a narrow crawl space leading to the tail gunner’s compartment. It might have been the least enviable position on a B-17 because it was a vulnerable position from which to attack the plane.

While the Flying Fortress was designed by Boeing, other manufacturers were called upon to meet front-line demand. One of these other companies, Douglas, built the plane that became the Sentimental Journey in November 1944. The bomber was set to Europe but arrived too late for combat in the European Theater of Operations. It was then sent to the Pacific Theater in the Philippines.

“She did some military things here and there. She never dropped a bomb. She never got shot at, never fired a shot,” Campbell said of the ship. “She was a warbird that was never really in it – a bridesmaid instead of a bride kind of thing.”

Just because it missed action in World War II doesn’t mean the Sentimental Journey had an uneventful career. After a brief stint at the “Boneyard” for retired and surplus aircraft at Davis-Monthan Air Force Base in Tucson, Arizona, the B-17 was returned to service for tasks as varied as flying drones through radioactive clouds during atomic weapons tests, ferry service, marine search-and-rescue, and firefighting. The aircraft eventually made it back to the Boneyard, but didn’t stay there.

“[The Commemorative Air Force] got her in 1978,” Campbell said. “It’s sort of an overused term, but it was a labor of love finding the parts and getting her back to what you see now. She is fully restored to World War II glory down to the Norden bombsight in the nose.”

The B-17G, with its chin turret, was the definitive design of the bomber’s line. Carrying up to 8,000 pounds of bombs and armed with 13 .50-caliber machine guns for defense, the B-17 – like its counterpart, the B-24 Liberator – was a formidable weapon. But the air campaign that featured both bombers only partially fulfilled the promises of the most enthusiastic and vocal of pre-war theorists who argued that strategic bombing alone could bring an enemy to its knees by destroying its production and defensive capability and undermine its morale – sapping its will to fight.

Historian Stanley Weintraub argued that the thousands of Allied air crews did disrupt enemy industrial production – especially the production of new weapons – and did disrupt the disposition, movement and effectiveness of enemy forces. But, while seeing Allied aircraft above might have benefitted the morale of citizens in enemy-occupied countries, the bombing campaign had little if any adverse effect on enemy morale.

The most valuable result of the bombing campaign came after the arrival of the P-51 Mustang fighter. The Mustang alone had the range to escort bombers from England to Berlin and back, and it could out-compete most German fighters in aerial combat. Historian Robert Leckie noted a shift in strategy occurred after the deployment of the P-51. Targets were chosen to lure the Luftwaffe into combat.

American aircraft and air crews could be replaced quickly. Enemy aircraft – and most important, air crews, could not. By sacrificing American lives, the air campaigns in Europe and the Pacific destroyed the enemy’s ability to defend itself in the air.

The volunteer crew of the Sentimental Journey would like the public to remember that sacrifice long after their bomber has returned home to Arizona.

Dave Lawrence is sports editor of The Mechanicsville Local and Ashland-Hanover Local. Both of his parents served in the U.S. Air Force. Dave was born at Westover Air Force Base in Massachusetts, which was headquarters of the Eighth Air Force at the time, and grew up near Barksdale Air Force Base, which is now headquarters of “The Mighty Eighth.” He can be reached at dlawrence@mechlocal.com.

Local runners get back on course in 5K

MECHANICSVILLE – Local high school runners have had a long time off, but that doesn’t mean they have spent the months in isolation as a result…

ASHLAND, Va. -- The World War II-era B-17 bomber "Sentimental Journey" draws visitors to the tarmac during a visit to the Hanover County Airport on Sunday, Sept. 20, 2020.

The waist gunner’s compartment may look spacious enough for two, but the space could get quite claustrophobic in the heat of battle.