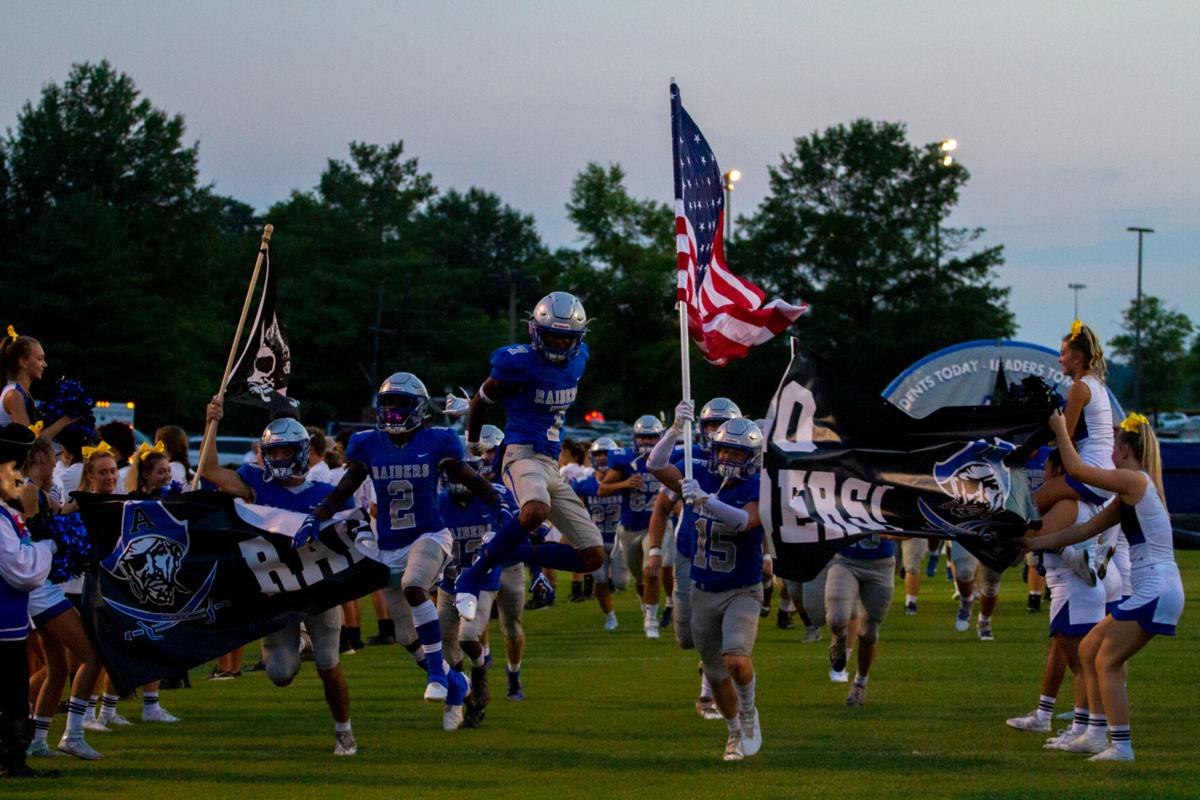 MECHANICSVILLE, Va. -- The Atlee football team rushes onto the field prior to its 17-0 season-opening victory over visiting Henrico on Thursday, Aug. 26, 2021. 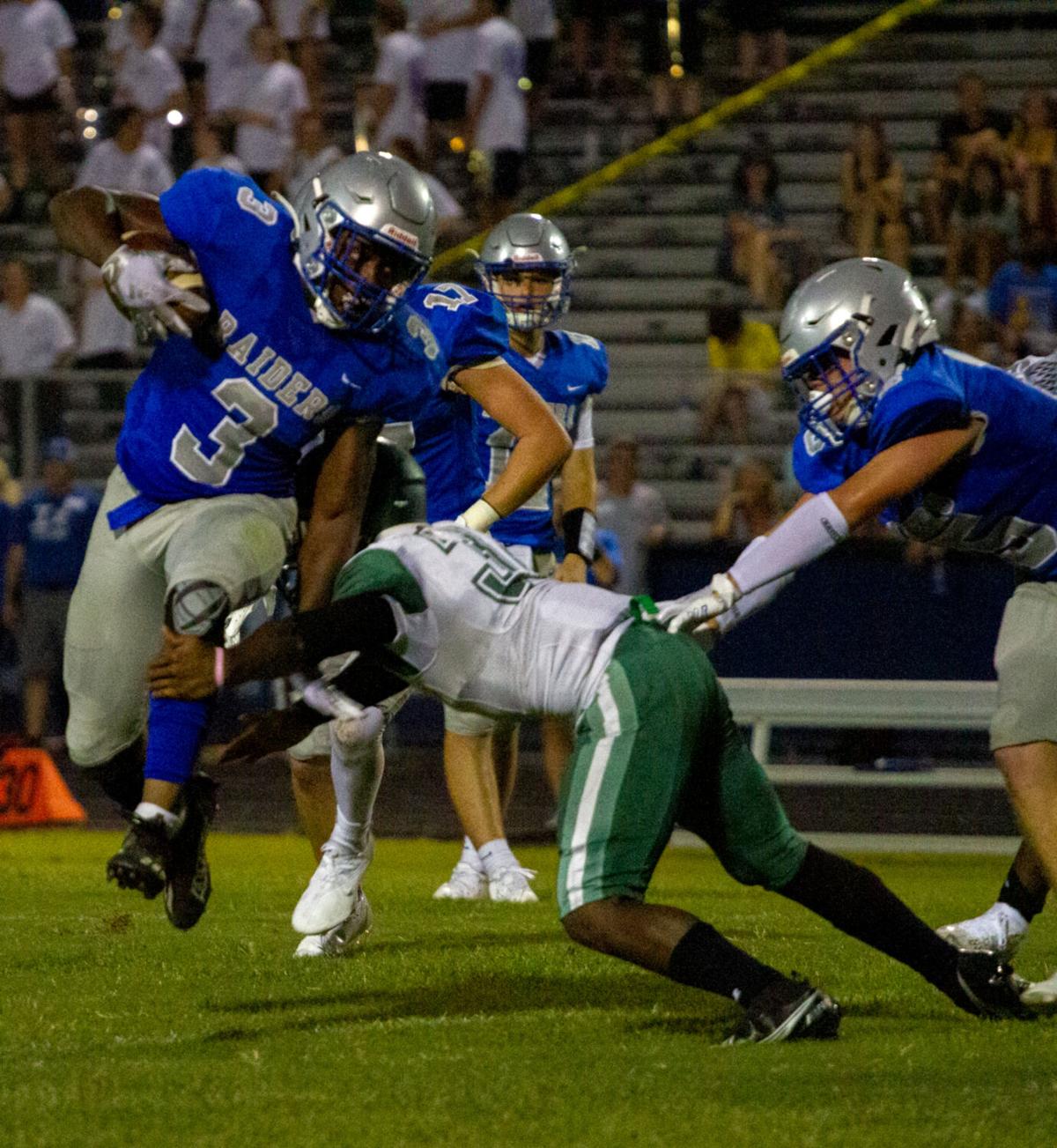 MECHANICSVILLE, Va. -- Atlee running back Caleb Warren (3) sheds a would-be Henrico tackler in the Raiders' 17-0 season-opening victory over the visiting Warriors on Thursday, Aug. 26, 2021. Warren finished with 15 carries for 74 yards and both of Atlee's touchdowns.

MECHANICSVILLE – Henrico’s football team visited Atlee Thursday bearing gifts, and the Raiders were not in the least bit shy accepting them.

Henrico led in most offensive statistics: 160 to 104 total yards, 73 to 13 passing yards, 63 to 51 total plays. The two teams were roughly equal in terms of rushing yards, first downs, and third-down conversions.

But the Warriors had four turnovers – all interceptions – to none for Atlee, one blocked punt, a bad snaps and a fumble on a punt that repeatedly gave Atlee excellent field position deep in Warrior territory.

“Any win is a good win,” said Atlee head football coach Matt Gray. “Football’s a game of situations and you try to take advantage of everything you’re given in all those situations.”

Atlee’s first score followed one of Henrico’s earliest mistakes. On the Warriors’ first possession, they were stifled by Atlee’s defense. The snap was a bit short, and as the punter reached forward to snag the football, his knee hit the ground. The ball was ruled dead, and the Raiders took over.

For the most part, the Raiders controlled the line of scrimmage, both on offense and defense.

After a disastrous opening the Warriors rallied somewhat to keep Atlee from crossing the goal line. When a blocked Henrico punt gave the Raiders a first-and-goal at the Warrior 5, Henrico’s defense stiffened, forcing the Raiders to opt for a 23-yard field goal attempts. Atlee kicker Zach Tschantre’s aim was true, increasing the Raiders’ lead to 10-0.

The Raiders found success hitting the left side of the Warriors’ defensive line. But that wasn’t necessarily a weakness on Henrico’s part.

“They were being really aggressive on defense,” Gray said. “They’re good. That’s a good football team.

“We were trying to find things that were going to work, and when we found it, we stomped in the mud puddle until it was dry.”

Atlee could not get to the end zone in the second- and third quarters. A nearly 40-yard-long field goal attempt by Tschantre hit the crossbar and fell into the end zone.

Still, Henrico wasn’t finished with its gift-giving. A fumble on a fourth-quarter long snap gave the Raiders great field position one more time. Again, Warren unwrapped the present with a 2-yard touchdown run, and Tschantre added the point-after to make it 17-0.

Warren led the Raiders offensively with 15 carries for 75 yards and both Atlee touchdowns.

Back-to-school numbers do tell a story

The Mechanicville Local Obituaries week of 9/22/21

BARNES, Janie Dunn, 75, of Mechanicsville, went to be with the Lord Friday, September 10, 2021. She was preceded in death by her son, Bubba Ra…

Hanover County continues its 300th anniversary celebration this weekend with Hanover AutumnFest at Hanover Tavern from 10 a.m to 3 p.m. this S…

The Mechanicsville Local Calendar of events week of 9/22/21

On any given Saturday evening traveling down Route 301 in Hanover County, it’s hard to predict how many or what kind of vintage vehicles you m…

AYERS, Serita, 57, of Mechanicsville, went to be with the Lord Wednesday, September 8, 2021. She is survived by her husband, Carl; two daughte…

The Mechanicsville Local Obituaries - Week of 9/8/21

Board moves forward with broadband initiative

With a quickly approaching deadline, Hanover officials are considering partnering with two companies to complete an application for Virginia T…

GLEN ALLEN – One could make a lot of money selling the close shave at the finish of the Hanover County Quad Wednesday.

MECHANICSVILLE, Va. -- The Atlee football team rushes onto the field prior to its 17-0 season-opening victory over visiting Henrico on Thursday, Aug. 26, 2021.

MECHANICSVILLE, Va. -- Atlee running back Caleb Warren (3) sheds a would-be Henrico tackler in the Raiders' 17-0 season-opening victory over the visiting Warriors on Thursday, Aug. 26, 2021. Warren finished with 15 carries for 74 yards and both of Atlee's touchdowns.